As you may know, hamstring muscle injury is the most frequent one in football with its prevalence ranging from 12% to 16% of all injuries. The incidence of this type of injury is 0.5-1.5 per 1000 hours of football match and training. It seems also that the risk of hamstring muscle injury re-occurrence is very high. Indeed, re-injury rate is around 22% within the next 2 months of the first injury.

The majority of the prevention programs concentrate on the eccentric strengthening of the hamstring muscles. The Nordic hamstring exercise is a simple eccentric hamstring strength exercise that is being used in a number of prevention routines. However, there is a limited number of randomized controlled studies examining the effect of eccentric muscle strengthening on hamstring injury rate in football players.
One such study was published in the November issue of the American Journal of Sports Medicine by Dr Petersen and colleagues (Petersen et al., 2011, pages 2296-2303). 942 professional and amateur football players were randomly allocated into 2 groups: the intervention and the control group. The intervention group trained with the Nordic hamstring exercise for 10 weeks whereas the control group followed only the regular team’s training. Eccentric strength training was performed once per week in the first week, 2 times in the 2nd week and 3 times per week for the weeks 3-10. The team coach decided on the time of these exercises in the training session. The mean injury registration period for these players was 318 days. 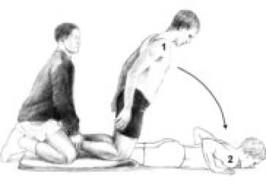